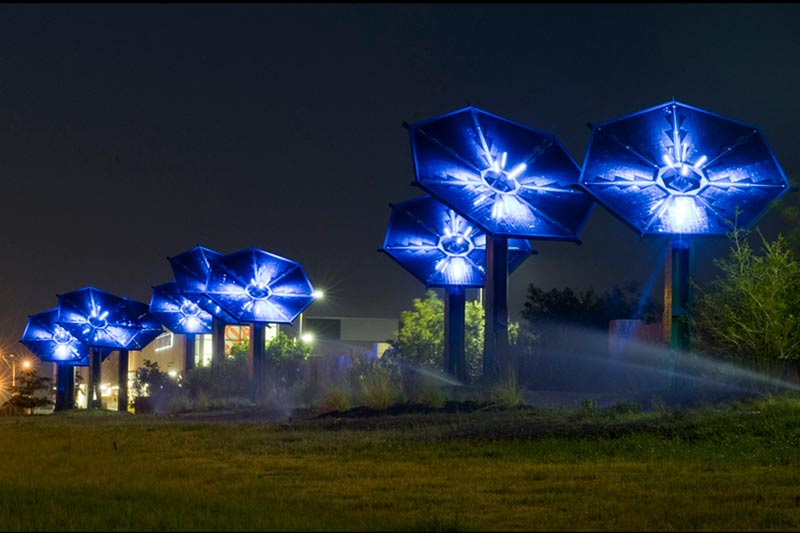 We are proud to be featured in the latest issue of Energy C10 Insights, October 2019 edition! Read more below…

While cruising down Interstate 35 outside of Austin, TX, at sunset, you will notice a pleasant sapphirine glow radiating from 15 structures set up on the side of the highway, posing as the state’s largest public art installation. Resembling the shape of a sunflower, these self-sustaining power generators have a “stem,” and their “petals” are laced with solar photovoltaic panels that are aimed skyward. Titled ‘Sunflowers, An Electric Garden,’ this project is designed by the renowned artist duo, Mags Harries & Lajos Héder, to raise awareness on renewable energy throughout the state. However, the real magic behind this art project is created by Aesthetic Green Power’s (AGP) vast building-integrated photovoltaics (BIPV) expertise. “The state of Texas wanted to demonstrate the capabilities of solar energy in an attractive and innovative manner,” says Joe Morrissey, executive director of AGP. In collaboration with Mags Harries & Lajos Héder, Morrissey and his team built the electric garden to display the practical applications of solar energy.

Currently, AGP specializes in solar-based power generation and utilizes European methods of building roofs with counter battens. “This type of framework allows us to place wires and panels in a secure and effective manner,” explains Morrissey. Today, AGP holds the patents for active building products (ABUP) and active building materials (ABUM)—trademarked by SPDLabs—which empowers the company to effectively work with weathering skins for buildings and ensure that the panels are fitted in a structurally safe and sound way. “Our panels can withstand extreme heat and the coldest of winters,” mentions Morrissey.

Displaying such expertise in roofing architecture, AGP has a slew of products designed to help an establishment become self-sufficient in their energy usage. Some of the company’s innovations that enable solar and thermal energy generation are TallSlates, Building Integrated Thermal Energy Roofing Systems (BITERS), Sunslates5, and Sunslates6. The BITERS

system, for instance, is a heat-transferring tool developed by Atlantis USA and is owned by SPDLabs. Along with these solutions, AGP also provides commercial buildings with the canopy and facade BIPV glass products to deliver the most comprehensive, holistic energy solution.

To further elucidate on AGP’s capabilities, Morrissey recalls one of their biggest commercial projects: providing an aesthetic lighting and canopy glass for the MetLife Stadium in New Jersey. “We covered an approximate 32.8 feet-wide perimeter—from the nosebleed seats to the top of the compound—with our solar and LED lighting products,” he says. Depending on the football teams’ color themes, the LED panels brighten the night sky with an array of powerful lights, or as Morrissey puts it, “color mood rings.”

With a robust understanding of renewable energy’s abilities, AGP intends to continue innovating and delivering new solar and thermal-based products for residential and commercial purposes. Moreover, with the advent of eco- friendly transit systems like the JPod, the company seeks to invest its solar technology in green transportation solutions. For now, the JPod—a nascent concept of vehicles, where two to four passengers can travel in a compact wagon that is suspended from a bridge like a monorail—is the primary focus. “This innovation promises a self-sustained, non- polluting mode of transport, which is vital today,” says Morrissey. AGP is convinced that renewable energy is the true goal for an environmentally sustainable future, and will continue to develop solar energy-based solutions to serve that cause.